A record that always reminds you of Ibiza?

When did you become a vegan and what prompted you to do so?

I became vegan maybe 4 to 5 years ago now I’d say. Initially I just wanted to stop eating meat, like beef, pork, chicken etc. as I stared to feel more connected to animals – although I’ve always been very passionate towards animals, I guess as I became more spiritual I just felt so much closer to them that I really started to think about why I was eating them and of course along with this I was seeing many of the horrific videos of slaughter houses and just how much abuse goes on in the world with animals. Things just started to not feel right, I was upset with the world and starting to understanding that I was a part of the abuse by supporting these companies that torture and murder billions of innocent animals through buying and eating meat. I just knew I had to stop. Also I would notice that every time I would eat meat I just felt heavy and lethargic after every meal, always tired and I wanted to see if I stopped eating meat, would I feel better? Which of course I I massively did! It wasn’t until after I stopped eating meat, that started to go through the same thing one by one with fish, then egg and then cheese. It was slightly different with these as mentally I was quite happy for a while eating fish and cheese etc. but my body started to reject them, I would feel sick and my stomach would be messed up. So eventually I gave it all up which was really difficult to begin with but you get used to it and I just loved it in the end!! Is being a vegan and an artist on tour constantly sometimes a problem, are you ever stuck for food choices?

Yes it’s a huge problem for me. Well I wouldn’t necessarily say a problem but it’s very difficult and challenging as most places in the world don’t cater at all for vegans and a lot of places still don’t really know what a vegan is. Sometimes you have to go for long periods of time with shit food eating chips, crisps and bread all of the time! It really bothers me and I crave good food all the time. You always have to create something with food to make it vegan on the road – crisp sandwiches and crap stuff like that ha. It all depends where you got in the world to how difficult it is, but yeah it does my head in! Ha!

What other DJs you know are also vegan or thinking about it? Do you swap tips?

Jamie Jones, Chris Liebing, Josh Wink, Yousef, Rebekah, Jon Kong from Leftwing & Cody, Max Chapman, Robert James is on the way to becoming vegan, Danny Howells, Moby – there’s tons more but this is all I can think off the top of my head! Carl Cox…ha no he’s not!! I don’t think anyways ha!

What is your signature dish at the moment when cooking?

Hmm, my signature dish? Well I’m no cook by any means, I can only cook a handful of things, but I’d say a curry. Or I’ve managed to pull off some wicked vegan lasagnes before and a great shepherds pie.

What are your main go-to ingredients?

Ha my go-to ingredients? Funny question this, feel like I’m meant to be a chef or something – let’s just get this straight for everyone reading this. I’m absolutely rubbish at cooking and I usually use get Deliveroo or Uber Eats. But I love turmeric, garlic and chilli – if I had to choose one it would always be chilli. I LOVE spicy food!

Your biggest ever food mistake?

My biggest ever food mistake was making vegan burgers. I totally messed it up, it took me like 2 hours and I was stressing my head off as it was all going wrong. I remember just adding waaaay too much flour to the burgers and they ended up becoming sloppy dough balls, it was a shocker. I’ve never tried to make them again since.

Probably a huge fish eye when I was about 10 years old. Was absolutely disgusting and I remember it popping in my mouth! Fuck that shit.

Last time you followed a recipe and what was it?

I think it was me and one of my friends tried to attempt to make vegan scrambled eggs, but ones that actually tastes like proper eggs – not just scrambled tofu! We went round the full store to get all the ingredients, managed to get everything apart from maybe one or two things and after like 30 mins decided we just couldn’t be arsed. So we just left the bag full of ingredients and went to a nearby cafe and had a veggie breakfast. I’ve realised life is just so much easier when you don’t cook!!

Your favourite 3 restaurants from around the world…

This is a hard question as I can never remember anything, never mind names of restaurants ha. There was this amazing vegan breakfast / lunch place I went to in Victoria, Australia called Matcha MylkBar, this is by far one of the best vegan places I’ve ever been to…

There’s a really cool vegan spot on Oxford Street in London called Vantra. It’s like a big vegan buffet with everything, you just get a big silver tray and fill it up as much as you want, weigh it and thats it. It’s really nice! It’s really hard to choose a third one, but seeing as though curry is one of my favourite foods, there is a banging curry house in Ibiza called Kathmandu and I just love the veggie curries they do there.

A DJ or musician that has surprised you with their cooking skills at home/their home…what did they cook?

Probably Darius Syrossian if I was to say a DJ. He’s the only DJ that’s ever cooked for me and he’s a really good cook.

What is the best vegan burger, pizza or decadent dessert you have sampled?

You know what, I don’t usually like vegan burgers as they’re usually really sloppy and taste nothing like meat. The closest I’ve tasted to meat burgers has to be Linda McCartneys burgers. I actually really like them and I much prefer them to the usual sloppy lentil and quinoa patty crap. You never really get good vegan pizzas I don’t think. Pizza is all about the cheese for me and the pepperoni – now that I don’t eat any of that I’ve never been impressed by one yet. Although there is a mint vegan place called FED by Water in Dalston, London. 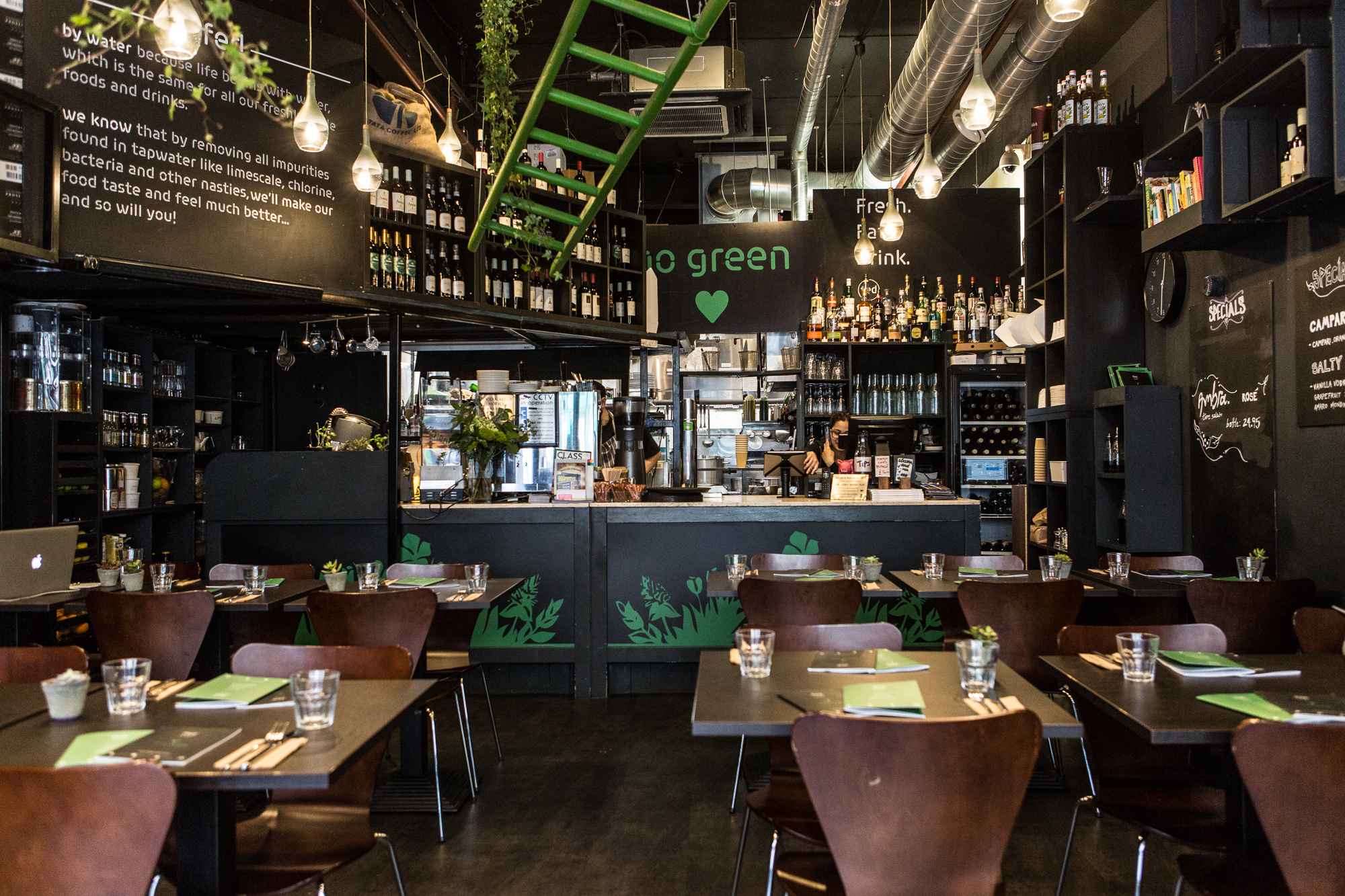 They do proper Calzones and pizzas which are all vegan. The Calzone was really good actually but you can’t class that as a pizza, can you? Ha. I can’t remember the last time I had a desert that was banging since becoming vegan. I’ve definitely had some but I don’t remember what or where or when or how or why.

I never go home pissed! If I was to then fuck knows…probably some old as fuck Linda McCartneys sausages.

3 things you would like to educate people about veganism…

Well first of all the fact that your no longer supporting the slaughtering, abuse and torture of billions of innocent animals. Secondly, your health will improve – I haven’t been ill once since I became vegan and I used to get a cold or flu all the time. You feel much better and body feels lighter. Much better energy and clearer mind. Never mind what a healthy diet can do for your longterm health. There are so many diseases and illness’s a vegan diet can help prevent so why would you not be interested? It’s the way forward for the planet, to live on this planet and be sustainable the world is going to have to move towards being vegan as the way things are going right now. It’s not sustainable and things are getting so out of hand with what were doing to the planet, that at some point were going to have to stop eating meat – there’s too much to say in this interview on text so just go and watch Conspiracy, Earthlings, What The Health and Leonardo Di Caprio’s documentary Before The Flood to understand fully what I mean here. Why would you not want to live a more compassionate way of life. We don’t need to eat meat anymore, some people do need certain nutrients and supplements to live fully which I completely understand but there are ways around it. For me, just knowing that I’m not in anyway giving money to these barbaric industries anymore makes me happy. I believe its a more conscious way of living and better for everyone and everything.

Probably has to be down by Cafe Mambo and Savannah. I imagine there is some much better places like Benirras or somewhere but I’ve never actually been…

Arrive early enough to spend the day going to Atlantis and climbing down to the lagoon with all your mates, do some cliff jumping and snorkelling. A packed lunch or the usual baguette, alioli (if it was vegan ha), Doritos, Doritos hot dip and a bottle of orange Fanta. Then after Atlantis go back to your massive sick villa you and your mates have rented, get on it for a few hours with some of your mates on the decks, maybe watch sunset there if you have the view or go somewhere else for sunset, have a few drinks. Then go back to your villa for a couple of hours and get on it some more, then head out to DC10 for 1am – have a mint night on the dancefloor – not backstage in VIP as it’s crap back there. Sweat your tits off for hours, have one of those loved up moments with your best mate outside bog eyed and jaw chattering. Maybe head to Cocoon afterwards for the last few hours or until your legs give way. Head to some sick villa afterparty if you can be arsed, otherwise you and all your closest pals head back to your villa and just get bang on it then end up having sex with some worldie – pass out then get your flight home!!! Buzzing!!!

Catch wAFF all over Ibiza this summer…